May 24, 2012
My company announced that we could undergo a medical checkup, the company would bear the cost.
Anything that's free sounds good right? So after much ado we scheduled our checkup and reached early (8:30 is really very early!)

As soon as we went in we were asked to fill out a form, which apart from other details had a question "Nature of work" I had to think really hard, but then since I could not think of anything but sedentary, I went with my neighbor who wrote "software engineer"

Next was the drinking water test. Drink, drink and drink but the USG expert was not satisfied. Wonder why all the guys passed the test in the first go and all us girls were asked to drink more water! I will keep away from water for quite some days now.

Then the blood that they extracted for test(s), which I am sure will last me the tests for a few years now. And he could not find my vein, so he made three holes as compared to only two for others.

The other tests were not as complicated as expected, but were not conducted well I would say. All the sample tubes had my gender as "male". My stress test was double as the computer hung up when my test was 80% done.

Ohh and never go for these tests after your back from a trip and you are a foodie. You get the point I hope because I cannot elaborate more.

And as far as the timepass provision goes, there is a channel named live media which just keeps showing the same ads, puzzles, ads, puzzles and you will easily remember the answers to all the questions till your done with 3-4 tests :D
RandomRamblings 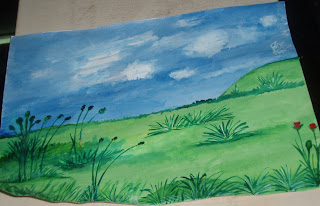